Following on from some heroic moments of the championship 2017 season, the 2018 Northcote Premiers set out with a large target on their back. Retaining most of the team and welcoming a few new and old faces home, proved a huge boost in creating a well-rounded group of young men who thrived on comradery and culture. The honour of winning the Buck Shelford Shield for first-round winners was achieved against a robust East Coast Bays side that Northcote would later meet in the finals, with the game coming down to the wire with the score finishing up 18-17 in Northcote’s favour.

Defending the honourable Les Pearce Memorial shield (Ranfurly Shield of North Harbour Rugby) meant the Northcote Premiers extended their unbeaten home run to two seasons having not being beaten at home, the ‘Graveyard’. As the season rolled on, Northcote established themselves again at the top of the ladder only having one slip up to a strong Massey side at Moire Park, 5 weeks out from the semi-final. However, this may have been a blessing in disguise as it meant going back to the drawing board and figuring out what it would take to win the title again. This paid dividends as Northcote refocused heading into a tough final match up. Firstly, against a spirited North Shore side, the game was tied on the hooter and went to extra time “golden point” relying on first five Jack Bergin to kick the winning penalty. This was only to be capitalized on by an outstanding team performance the following weekend where Northcote came from behind to again beat a depleted East Coast Bays (25-20) and deservedly win their second championship in as many years.

Many thanks to the supporters who filled the grandstand rain, hail or shine and followed the team around the region, your support did not go unnoticed.

Also a massive thank you goes out to Rex Industrial Equipment, Recreational Services, Sue Mayhew at Bayleys, Gerard Bosley at Store Pro, Paul Robertson at Robertson and Sinclair and Paul Barnard at Executive Pools. Without your support, this memorable season could not have occurred. We appreciate it deeply. 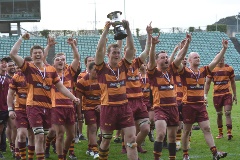