Coached by Peter Dick and John Rusk, this team has had a tight draw. The team has yet to record a win after six competition games. The nearest result was a narrow 3-4 loss to a strong university side.

This side has at times struggled in the scrummage, having only one recognised prop in Steve Smith and a shortage of generally of tight forwards. Several of the backs have to fill positions up front but on each occasion have acquitted themselves well.

The team has a number of excellent players, in particular a fine loose forward trio in Dave Holden, Todd Boyd and Des Crosland. In teh backs, Ian McGougan playing either 1st five or full back has kept the team in contention in most matches with his accurate goal kicking and long range touch finders.

Team spirit is high and as teh team strikes the less fancied sides in teh second half of teh first round, can be expected to win its share of games.

Against Otahuhu Black the team went down 6-13. At half time the score was 6-6 with ian kicking two fine penalties for Northcote. The game was still in the balance until the last ten minutes when Otahuhu broke the deadlock.

Player of the day was Steve Clark normally a half back, he gave a very competent display at fullback. Gusty second five Robert Edwards played out the first half with a broken knee cap and will unfortunately be out for the rest of teh season. His strong tackling, which has been a feature of teh teams defense this year, will be missed. 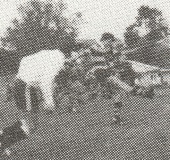