The 2016 J3 Black Team had a great group of enthusiastic players. A bigger playing squad this year with four experienced players from last year’s J3 group returning & six new players to the club including our first female team member. The combination of these new players along with the core of our original team from last year resulted in a talented group of players to compete with any team in the J3 competition.

The standard of rugby in the competition had improved significantly on the prior year and it was pleasing to see how well each and every player developed throughout the season. Their improvement was also greatly assisted by the addition of an assistant coach Steve Dooley, the fitness work done by Susie Cleland, along with the support from other parents that made it a fun team environment throughout the season.

Our on-field results in the first half of the season started out very well. There were a few games mid-season that we lost that could have gone either way. Everyone can feel proud to have contributed to the success of this team. The skills & friendships developed this year will make for an exciting group of rugby players for next year. Well done to all.

A special thanks to the families and supporters of the team. Enthusiastic and willing support has contributed to a great feel throughout this team. It has made coaching these talented individuals such a pleasure. A special thanks to Simon Bosley for doing a great job refereeing. We look forward to seeing you all again next year. 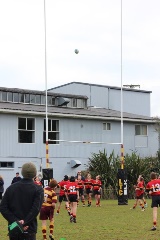 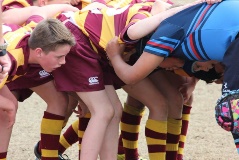 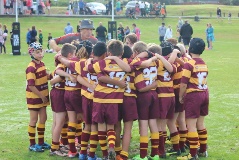