Now that the 2016 season has wrapped up for J3 Maroon it was clear that it was definitely a season of two halves, the first half we struggled to find some good consistency in our games and string together two good halves.  We would start strong and then fade or start slow and finish with all guns blazing.   Also to test the boys’ resilience we lost 3 games in the last play of the game which was tough but they brushed the defeats off and put it behind them.

In the second half of the year, the boys finally found their feet and played as a team to string together consistent wins game after game.  Once again the team showed a great attitude to training and we had consistent numbers every week even when the weather didn’t come to the party.

It was pleasing to see the team finish the year on a high and with this year’s competition being a lot tougher than last year I think they should be happy with how their season panned out especially the last half of the year.

Next year is a big step up again with contested scrums etc. but I’m sure the boys who return next year will be up for it.

Lastly thank you to the parents for getting the boys to training and games, also thanks to Jamie and Robbo for their work this year, let’s do it again next year. 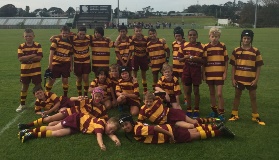