Hi all, 2016 has been a big step up year for all the players, with a number of new faces joining the players from last years’ J5 Gold team. In addition, the team had to encounter 15 aside and playing on a full field for the first time.

The season started with some early pre-season practice which enabled the team to go into the first part of the competition fit and ready for action. There were a number of highlights during the season including the first half against Takapuna Blue. A complete and dominant performance for ones so young. The presence of Nick Mayhew and Bryn Hall who came to help out at a couple of our training sessions with the team. Thanks guys.

J4 Gold has played some wonderful rugby at times this season, as well as still learning the fundamentals of the game. Thanks to JT, Flea, Fotu and others who assisted at training and on the game day throughout the season. The boys responded very well this year and by the end of the season you could see a very competitive team that took pride wearing the Cote jersey on to the field.

A big thank you to Ross who took on the role of manager and ensured everything ran smoothly. Another thank you to our ref, Alex who answered the SOS!

To the many supporters/parents, who committed to J4 Gold, rain or shine supporting the team and their boys. THANK YOU! It makes us mighty proud to be involved in such a committed rugby team … LTC!
Mike & Paul

Winners of the Coca Cola Cup with 818 points. 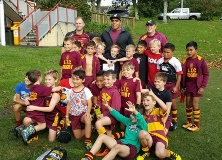 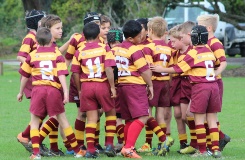