Fourth-year together for most of us, and the bond and friendships between teammates are developing strongly.

It’s great seeing the players growing into their roles within the team. Zach was fearless and direct, running hard and tackling even harder, a real weapon for us. Liam was colossal, scoring some outstanding tries with great footwork and a strong fend. Lucas showed a knack for breaking free from contact to set up and score some awesome tries. Flynn developed his playmaking skills, with good acceleration, vision and offloading. Patrick put his body on the line, tackled hard, and scored some super tries with his speed. Maia scored some stunning tries with her blinding speed and tackled strongly in her first year with the team. Roxy set up some great tries with long runs and fantastic offloads. Finnien’s footwork and speed led to some amazing tries from deep in our own half. Joel worked hard to get involved and when running hard and straight was powerful and hard to stop. Chris grew immensely as a player worked hard, and was outstanding in the tight with his locking partner Tye, who was aggressive with the ball in hand and was difficult to tackle. Nate is our breakdown mongrel and loves getting in and stealing the ball. Eli, far more powerful than his size suggests, bumped off much bigger players every week and has the best try-scoring dive in the grade. Jack is a fearless tackler, regularly chopped players down around the ankles, and carried the ball forward strongly. Great team and another awesome season!

Looking forward to another year, and full-field rugby in 2017!

Thanks to the parents for their support, and also to our manager & ref Paul, and co-coach Jose for everything they do for the team. 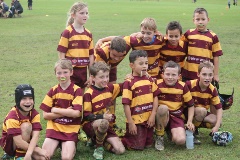 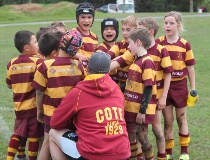