J5 White are an enthusiastic and keen group of boys who love all aspects of Rugby, including training in the rain. We were extremely lucky to have 12 boys return for their second year of Tackle Rugby. Added to our team were 3 new players to give us a total of 15 players. The 3 new players fit straight into the group as if they had played together for the last 3 years.

We have had a mixed year and lost a few really tight matches! As coaches and supporters, we really enjoy the close contests even if we lose. Our team seem to rise to the occasion against the better teams. We have had a number of comments from opposition coaches after close games on how hard our boys are. One team commented that they had not lost for 3 straight years and only just held onto their winning record by 1 try against our team.

Although the coaches and supporters enjoy the close battle, the boys much prefer games when they are all lining up to score tries.

The coaches have spent a lot of time training the basics of the Ruck and Maul.

Towards the second half of the season, all the training was really starting to show, we have been clearing out and turning over the ball on regular occasions. It is very pleasing to see the boys create turn over balls when they are hard on defence.

Once again our team shared the try-scoring statistics with every player crossing the line at some stage of the season. In fact, we have 7 players who have almost scored the same number of tries for the entire season.

Thank you to all the parents that help out every week.

The boys are all extremely excited about moving up to full fields next year, and can’t wait for the J4 Season to start. 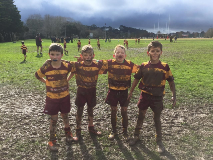 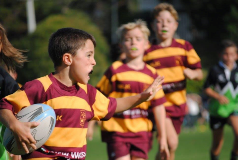 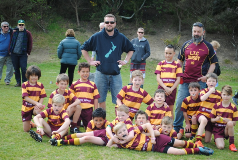