We quickly learned that there was more to this year than tackling and there was a whole bunch of new stuff going on; rucks, malls, scrums and lineouts. Not to mention a pile of new rules; don’t play the ball on the ground, don’t tackle above the chest. And of course some of the basics from Rippa; run (forward!) and pass (behind you!)

It wasn’t until the first game that everyone realised that this was a BIG change from Rippa, a few tears, bangs and bruises later and we were underway with 2016.

After a few games, the contact wasn’t as daunting as it first seemed and we started running, passing and playing as a team.

Halfway through the season, the coaches weren’t allowed on the field which was harder for the coaches to deal with than the kids!

Sideline support was always positive and I’ll never forget the big round of applause when we came off the field at Browns Bay having lost by 1 try. The whole team played their hearts out and all our supporters acknowledged that - it summed up the year. Thanks to all our parents and supporters - awesome.

By the end of the season we were playing proper rugby, the change was massive and Stu and I are extremely proud of how everyone has developed – keep playing rugby, have fun, run straight and tackle low! 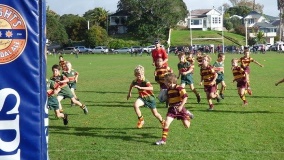 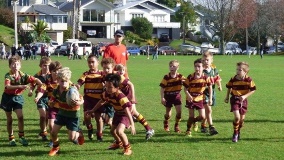 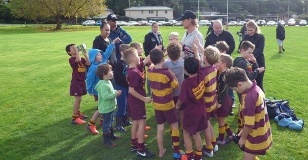