We were lucky to have most of the 2015 J8 Gold team back together for another year plus a few new faces.

The boys got off to a great start with a win against Takapuna and quickly formed a tight playing group that any coach would be proud of.

Following a few heavy losses early on, the boys worked hard on their “rushing” defence. They learned to work as a team to shut down the oppositions quick runners and started forcing some great turnovers.

By the second half of the season, the boys had fine-tuned their passing game. We started seeing the ball being passed in running play. This was to the surprise of the opposition and parents watching. Some of the team effort tries would earn a spot on any highlights reel.

The most memorable moment of the season will have to be the cold June morning that we played on a frozen Kaipatiki park.

From the coaching staff (Bevan, Stefan & Ben) we would like to thank all the other parents who helped during the year and made the time to get the boys along to training and the games. We look forward to seeing everyone next year as the boys move from Rippa to tackle 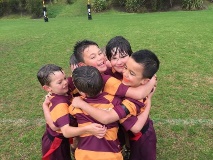