2016 is the second season together for the core of our team, so the boys knew each other and got back into it quickly. We also had some new boys join the team which were really great with them fitting in quickly. We got stuck into the practice quickly and established that the coaches had little control over a bunch of 6 and 7-year-olds who ran rings around us!

It only took us a few practises to get our heads around the mechanics of passing when ripped, ripping and retiring, and ‘squashing that worm’. Come game day we played some really good running rugby, scored some great tries and support play right to the try line. In defence, the boys worked really hard with their ‘tiger claws’ making a lot of really good rips which gave the team quite a few ball turnovers to show for our defensive work. Win, lose or draw the boys played to the last whistle.

There are some great characters in our team with all the boys trying really hard and having fun as a team. As coaches, we are immensely proud of our team’s sportsmanship and it was great to see all of the team advance their skills, grow as rugby players and enjoy their rugby. Thanks for the great year and look forward to seeing you all at the club in 2017. 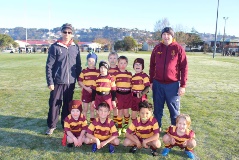 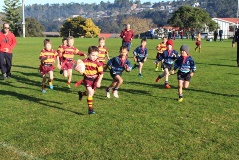