This was my first year of coaching J8 Rippa Rugby, having to go back to basics and starting from the beginning! It was a great challenge but one I was willing to take on.

J8 Black are a great bunch of boys, right from the beginning, they were ready to get stuck in and learn something! Training is always a blast, with their favourite game being bull rush, ‘J8 BLACK style’! They especially loved it when the parents would join in, it became our training tradition. This helped them immensely with dodging those rippers and running straight up the middle to score those tries, it also helped them become ripping machines!! They are great at encouraging each other and are getting a lot better at making sure their teammates all get a go with the ball.

With majority games won, many draws and a few losses I am so proud of my boys and believe they have great potential for the years to come, hopefully, a few All BLACKS in the making,  This challenge has been so rewarding in so many ways! I have enjoyed coaching these boys, and cannot wait for season 2017!

A big thank you to the parents we could not have done this season without your support. See you all in the New Year! 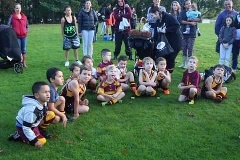 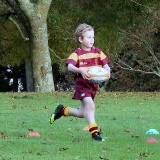