Great to see the enthusiasm on the faces of the new group of boys making up J8 Gold for 2016. With 13 players in the team, training was always fun with herding techniques and drills used in equal measure to good effect. Coaches and parents were extremely surprised to see that the chaos of training did not transfer to game day.

From the first game, the team proved to be quick at picking up the basics. A first-up draw was a good result and also a good indicator of things to come. Ripping and running was not going to be a problem this year! The problem was how to stop the boys climbing over each other to have a run or get the rip!!

The team has its stars in try-scoring machines Lachlan and Lincoln and ripping sharks Matthew and Tawai, but the real strength is the all-around contribution from all players in the team. The spread of Tries and Rips for the season has been really pleasing and shows their keenness to learn and enjoyment of the game.

Some memorable moments during the season. The fear on the face of some opposition when 10 smiling maniacs are charging at them to get a rip. The great frost of 2016 at Glenfield where the boys struggled to cope with the cold. Some early signs of future skills; tackling, passing off the ground, diving, the double rip, sidestepping, etc.

When asked to help make up numbers for the other teams all boys have shown good sportsmanship in joining in and doing their best.

After the first up draw, the Team has won all games (with 2 to go). Well done to the team for an awesome year in J8! A big thank you to Todd Wickenden and Brian Burns for helping coach and manage this year and also to the very supportive group of parents and family. See you next year. 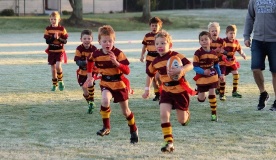 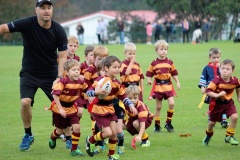 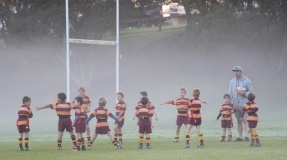