The 2018 season has been an extremely challenging year. We have had 13 players return from last year and 11 new players, this has made for a very large team. Unlike last year where we were plagued with injuries and broken bones, we have come through this year unscathed and at most games had 8 subs ready and willing to play.

With such a large team and a lot of new players, we have had to have many kids playing in different positions to get the right combinations. It has taken some time, but as the season has progressed, our team has really gelled together and it has been a pleasure watching them progress.

The step-up from J4 to J3 has been quite considerable, the skill levels shown by all players, including our opposition, has been a huge improvement from J4. There is definitely no easy teams in the current J3 grade across the North Harbour Clubs. Every weekend has been hard physical rugby and our players come off the field battered and bruised and also exhausted. It shows just how hard they are all trying and giving it their all.

Once again we have been very fortunate to have three coaches, Tank, Darren and Shaan and a group of very supportive parents throughout this season. Having parents help with shirt washing, bottle washing, gazebos for raining days and half time lollies or oranges certainly helps. We also have parents take the players through pre-training stretching program, allowing the coaches valuable time to put their heads together and discuss the training drills that they are about to implement. The coaches really appreciate the support the parents provide.

The season overall has been tough, with a few tight games just fall out of our grasp, a few close games that we have won, and unfortunately, we have also been given a few lessons from some very good teams. The players have enjoyed themselves, despite the tough physical games, and are all looking forward to next year’s rugby season. 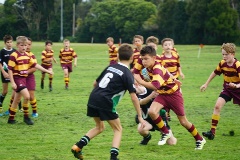