The boys started really well this year with a big scoreline against ECB before coming down with a big wake up in the next couple of games.

Forwards this year were lead very well by Nathan the ‘Raging Bull’ who went on to become the Captain end of Season, Luka and his straight running this year made him hard to put down as well as wrestling, he was joined by another tall Lock with good grunt Daniel.

In the front row joining Nath was The Smiling Assassin Isiah who once he learnt “Two Hands” was a revelation, Blake played like a hungry loose forward making good inroads and offloads.

The first season for Dante with the boys went very well with strong tackling and Henry scored some great tries towards the end of the season and never stopped trying with some try-saving tackles.

In the backs, the Slick Sidestepping of Anthony made him a great halfback and distributor, with Jesse who’s up the guts running and hard tackling bodes well for next year.

Outside them, Lachlan Lee was outstanding in every game and for his size would be one of the gutsiest players going round, Rylee came into his own with his fantastic running game and fending.

Then to the three Speedsters – Zach was elusive as always and a good leader for the backs, Lachie played like a man possessed at Stafford Park and capped it off with some good celebrations.

In his first season, Archie a fast zippy ball runner and will only get better next season as well.

Big thanks to Stefan and all parents Support (vocal I think you could say ) this year, heaps to work on for next season is full field and the rugby improved throughout the year and most of all it was great to see the Boys having Fun and coming off buggered each week which is all you can ask for!! Look forward to next year. 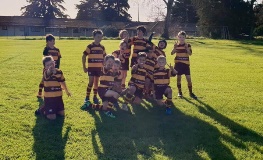 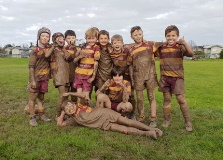