Our ambition as a team this year was simple, learn to play tackle rugby; not play rippa rugby with tackle! Our focus was first, the tackle, and then the ensuing breakdown. Throw in some basic attacking and defensive patterns, and we were on our way. We worked very hard in pre-season on our tackling technique and basic ruck and mall skills to help ensure that we secured the ball and retained possession.

From game 1 the kids started demonstrating some of the skills they had learned, great staple, bridging, and some of them even started trying to clear rucks; it was however a work in progress. We had some good results in the first half of the season, with four wins, a couple of close losses and a couple of heavy defeats. At training the kids showed a great willingness to learn and understand what we were trying to achieve but understood that we needed to bring more aggression to the contact area if we were going to be competitive, this would be our main focus to work on.

By the end of the season, the kids had nailed it! Cleaning out rucks at will, securing the ball with awesome technique and distributing on to the next phase.

An awesome season & a great platform to build on next year. The kids learned heaps, played hard; displayed brilliant sportsmanship, but most importantly had heaps of fun along the way!

Massive thanks to Trudy for a brilliant job managing the team, Macca, for your time at training and the effort you put into refereeing on Saturday. Thanks to the parents, who showed great commitment and great tolerance of what it was that we were trying to achieve.

My biggest thanks goes to the kids, whose efforts, attitude and team spirit throughout the year have been second to none. Bring on J5! 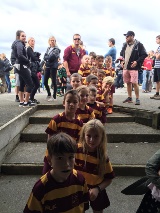 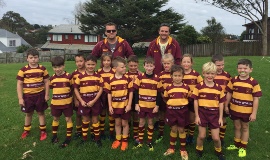 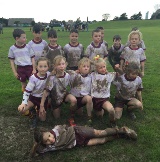