2018 has been a great year for the mighty Northcote J7 black rugby team. We had some awesome games winning 13 out of 14. We started our training off with bullrush and some fun drills, which got our season off to the best possible start beating age-old rivals Takapuna. My team consisted of 10 awesome players 9 of which were boys and 1 girl.  Seeing the difference from last year till now you could see the major improvements, from their passing levels, side steps, fair play and all-round smiling faces.

This year we played in the Snow White tournament, I was so immensely proud of my team's efforts as we had no subs and played 4 games throughout the day. With our first two being draws against teams we had never played, and then a win against Takapuna. We then made it to the plate semi-final losing only by 1 try.

In the last couple of training sessions for the year, I have incorporated some tackling drills and preparing my team for the step up to contact next year. The team enjoyed the self-standing tackle bags and the rolling doughnuts as it got them thinking of where to wrap their arms.

I would like to thank all the parents that have helped me throughout the year, it is really appreciated.

Peace out from Coach Damian 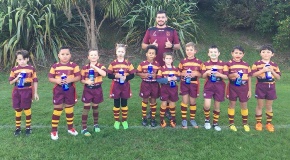