Watching the team pull on their Northcote jerseys for the first game was a special moment and we’ve had plenty more throughout the season – first tries, first rips, first break-away runs. The greatest highlight by far has been seeing them work together as a team and enjoy their first season of rugby.

We started the season with a bunch of excited and enthusiastic, if not a little bit nervous, individuals who all had a varying amount of knowledge of the game and skillsets. Everyone has been committed to participating in training sessions and games and as a result, it’s been great to see each player develop their skills week-on-week. For many, their initial focus was on scoring tries but as the season has gone on they’ve learnt that it’s just as important to stop the opposition and have really developed their ripping skills, even getting the occasional turnover. The season has been a mixed bag of wins, draws and losses – each taken with great sportsmanship and a willingness to focus on areas of improvement.

It’s been great fun coaching J8 Black for their first season of rugby – a learning curve for everyone, not just the players! Thank you to all the players’ families and supporters for making the season happen for our kids. 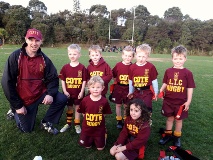