The term herding cats has a totally new meaning to me now having coached a new rugby team.

J8 Gold have shown me that they have the grit and determination to give anything a go. Every player started with a different grasp on the game, skill level and athletic ability, but as a team, we learnt and grew together. Each week we turn up to training ready to learn new skills and have fun. Saturday mornings as a team we have given it our best for the Cote. Win, lose or draw we had a lot of fun doing it.

Having been talked into coaching a team and coming in a complete coaching novice, the daunting task of teaching a team of 5-year olds drills and skills became easier as the weeks went on. The team made it easy through their eagerness to learn and grow. We got to know each other, learn about working together as a team as we continued to gain new skills.

The team have shown me how to have fun on the paddock, even after a long week at school when their attention levels are tested. The team’s favourite thing was a game of bull rush at the end of each training session.

I am super proud to have coached such a great group of kids and watching them grow each week.

Bring on 2019 for J7 and thanks for the fun year Xander, Justin, Boston, Mia, Austin, Titus, Brax, Ezekiel, Campbell, Van and Jack.
Return to galley 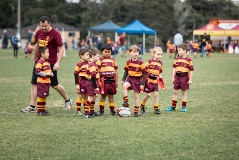 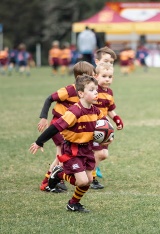