The Northcote Premier 2 did the unthinkable, backing up to become North Harbour Champions once again following their 2017 triumph.

They created NBRUSC history, being one of the respective Northcote sides in consecutive years to take out the Premiership 1 and 2 North Harbour titles.

Co-coaches Trevor Snookes and Doug Tatana forged what became a very effective unit towards the season end. Both have unprecedented coaching success at this level, with a trophy chest of three and five Championships respectively.

A patient build-up this year, with the team qualifying third in the second round. Then they turned it on; - overwhelming Marist 92-5 in the quarterfinal, upsetting the old foe North Shore away 34-29 in the semi and taking the victors spoils from East Coast Bays in a pulsating final 18-16.

The team ably led by 2nd five Raana Peakman who enjoyed a classy and pace filled backline inside and outside of him. There was plenty of gas and enterprise with centre Ben Smith leading the way, scoring 2 ties in the final securing a call up to the North Harbour B side in the process. His tally of 13 tries in 7 matches said it all.

Other standouts were wingers Andrui Sucu and David Bird (most improved back).

Enough of that glamour. In the forwards was where the hard work was done. Standouts were debutant Sean Boult (Player of the Year) at lock, backed up by fellow lock, veteran Jason Alexander and Josef Foley at loose forward. Number 8 Uate Viti was the best and fairest and debutante lock Ben Williams most improved.

The team thanks Managers Simon (never lost a season) Debelle, No. 2 Codie Beale, Glenn Whitley and Simon Williamson. The latter two, having been involved with this team for the past 10 years with 169 games and 4 Championships under their belt are taking a well-deserved break next year.

The team also thanks superb physios Steph and Simon and in addition to the Club Sponsors: Rex Industrial, Recreation Services and Sue Mayhew Bayleys, plus team sponsors: 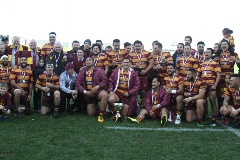 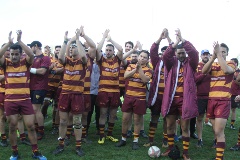