Our 2018 season started with hopes of going back to back.

We had lost 5 or 6 key players from 2017 but on paper, it looked like we’d have a competitive squad.

Pre-season numbers were low, and playing the champion of champions pre-season tournament cost us badly, losing Kaine Robertson to a season-ending injury, along with a number of other key players for the majority of the 1st round.

Into the season proper, injuries to an already reduced squad continued and although we regularly pushed sides for 30-40 minutes, we struggled to stay with them late in the game, enduring a number of scoreline blowouts.

At the end of the 1st round, and with the top 5 teams clearing out, it was evident we weren’t going to make the top 4.

As we moved into the 2nd round and came close to defaulting a game, Chatty started working closely with Joe Kurukaanga to utilize under 21-players who weren’t getting enough rugby. As the season went on, these young guys added a breath of fresh air. After a few games to find their feet in the grade they really started to shine. Special mention to young Luke Lombard who added some great defence and counter-attack to our backline. Also to forwards Keegan Van der Geest, Patrick Corcoran and Rae Courtenay who added quality numbers to our pack which saw us now able to add some impact from the bench.

With the addition of Killian Wilson and Juan Sahilices from the Prem 2’s, we started to hit our straps, winning 7 of our last nine games We then knocked off East Coast Bays in the Plate Semi and went on to win the Plate Final in style, beating Mahurangi 39-17, scoring some great tries to end the season on a winning note.

Our lock Andrew Sorenson aka ”Crusty” played his 20th season for the Gnomes, a terrific achievement and still playing some of his best footie.

Special mention to Eddie Meachan who is retiring after many successful years coaching the Gnomes, and who has a ton of respect from the boys.

Also, Jodi Ormsby and Peter Nonu are stepping aside from their management roles - their organization will be sorely missed and both will be a huge loss. 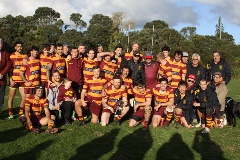