What a year for the Maroon under 11 Rippa girls team.  Coached by the ever-patient and selfless Andrew “Chattie” Chatfield, the girls went from strength to strength winning all 12 games, the largest margin being 23-6, the smallest against Northcote Gold 13-11.

With a squad of 13, subbing turned into an art form, with all girls begging to go on just as they had come off, itching to get in on the action. There were so many girls that it was hard to get only seven on the field, it was even more confusing keeping track of the rips and tries especially with the twins playing tricks in wearing the same boots and many of the girls having long blonde ponytails.

WIDE was to call at every game and girl, could this team spin it wide, a lot of tries scored on the wings as well as a few chip and chases. Special mention to DJ, superstar try scorer with 60 for the year, the twins consistently put a couple on the board each week with plenty of rips to boot. Superstar Rippa Bella, awesome on defence and always selfless with her feeding the backs. Speaking of backs plenty of eager speedsters like Jordan, Lily and Juliana, keeping the score ticking over. And it wasn't just a team of a few stars, across the year Izzy, Talia, Ruby, Paris and Isla all touched down multiple times, a great team effort

Awesome commitment from all the girls through training, cheering parents and great scorekeeping for Chris “statistician” Eng, thanks for an awesome year team, bring on 2019. 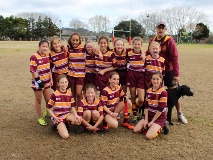