J2 Maroon came together this season with 19 or so players on paper and after a bit of shuffling, settled at 17.  With a few new faces in the group, new team dynamics and new friendships were formed.  Some weekends were a bit of a scramble to ensure a full team could take the field, but we proudly say the team took the field at every scheduled game and made the most of playing rugby.  To that end, we gratefully acknowledge the Taylor Twins - who helped to make up numbers when we needed, as well as turning out for their J3 team each week.  We also acknowledge the support of J2 White, who not only loaned players where possible but also happily merged training sessions from time to time.

The team were lucky to have the coaching expertise of Pani again, and along with Geoffro, he has ensured our boys continue to develop not only their on-field skills, but deepen their understanding of the 'picture' of the game.  Geoffro was also instrumental in bringing in two players from the senior club who helped at training.  Caleb and Ben bought a fresh approach to training - just changing drills up a little and bringing some of their knowledge to the mix.

We are lucky to have a number of naturally talented players who performed ably and consistently throughout the season.  It was also great to see others develop their own talents over the season and really start to shine in the later games.  Two brand new players to rugby really stood out and showed how quickly things can be learnt if the desire is strong.  The later games of the season showed that teamwork from the whole side pays dividends. 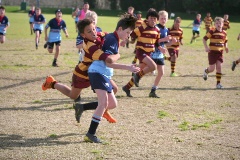 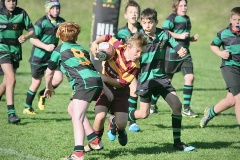 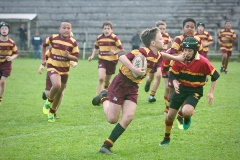