The 2019 season started with 8 players returning from last year’s team, 5 repeating J3 and 6 players brand new to rugby. This combination showed a good foundation to build a strong new team.

We were very lucky to have two eager Coaches. Unfortunately, one coach was badly injured in an accident and was taken out for two-thirds of the season. A special thanks to those parents to helped Paul to run the practices in the absence of Darren.

It was a season of learning with a number of boys playing in different positions until they found their ‘groove’.

Despite losing the majority of the games the boys never gave up. Their spirit and tenacity were impressive. All of the parents and coaches are extremely proud of our boys.

At the end of each game the whole team would run across the field and present the opposition with their Player of the Day with such enthusiasm, it showed their fantastic sportsmanship and their love of just playing rugby.

Towards the end of the season with positions cemented they strung a couple of wins together. Their love of the game grew even more.

Thank you to the parents and supporters for a fun season and we are all looking forward to next year. 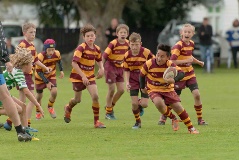