The boys this year in J4 Gold have played some hard, fair and great rugby. Their commitment and attitude in games when the going has got tough has been a far bigger improvement which is all you can ask for at this level. Working on the detailed points of the game it would be fair to say it’s been great to see them develop there rugby skills and mateship within the team working on backline moves, blowing out and Mongrel defence around the ruck.

Lead well in the Forwards by Luka who had an outstanding season scoring a thousand tries, The hard straight running from Isiah, Nathan the fighter in the tight, Blake who’s tough and elusive with ball in hand, outstanding ‘D’ from Jesse. New player this season George has been a revelation, with consistent hard work from Dante in the tight.

In the backs lead well by Anthony at halfback who’s gained metres every time, tough uncompromising Lachie Lee back up by his mate in the midfield Rylee ‘Nonu’, out to the Speedsters on the wing Archie and Kouta who have got better and better. Ending up in the backs the fender Daniel hard to out down and Henry the Terminator in tackling.

As we write this the team has won 4 or 5 on the trot and displayed great Sportsmanship, been awesome to see them enjoy their rugby.

Big thanks to Eugene for helping coach this year, Mandy as Manager, and Stefan for helping with Refereeing and coaching. Also John for his one on sessions with the boys, Bruce, Andrew and ‘Clipboard Michelle’ for their help along the way.

Also, all other parents and Grandparents who always keen to have a laugh and seem to be the last to leave Prizegivings etc (haha ), look forward to next year FULL FIELD, GO THE COTE. 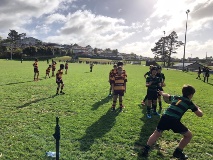 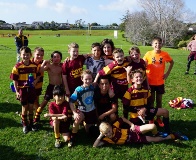