We are the pioneers of the first Senior boys Rippa team, formed out of a collection of 8-12yr old boys.  The boys faithfully turned up to training each week until we eventually found a Coach about seven weeks into the season.

The height and age variation in the team was about as spectacular as the team spirit and sportsmanship that emerged from this eclectic bunch.  Going into ‘battle’ for the first few games was somewhat daunting, but as time went on the game started falling into place and our defence and attacks became stronger.  Older boys buddied up with the younger boys till they got their first tries, which put the wind in their sails and turned them into our little ninja’s, ducking and diving over the try line from there on in.

Over the season the lines began to form, the rules became clearer, passing got better and formations started to become noticeable.  We were rewarded with a couple of very exciting wins.  Everyone had their unique strengths so it always made it very hard each week to pick a 'Player of the Day'.

We were fortunate to have a few siblings that helped to make up team numbers every now and then, and helped us out with more than a few tries!

As first time Coach and Manager, it was a steep learning curve but a most rewarding one as we got to know the boys and see the team develop and grow. 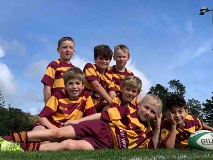