Our season started with a few 20 point losses to Silverdale. The second round came and again beaten by Silverdale but this time we took out every other team. We had Silverdale, one more time. Our grand final. We had a big Friday night game under lights and it poured down! Still, out on the field the girls where running, throwing the ball and laughing while the coaches ensured the gazebo shelters were working. At game time the girls produced a huge cheer to start and boy did they start. Eight to three leading at half time and onto a 16-10 win. Every girl brought the best of themselves to that game and proved that they were the team to beat.

At the start, we had a team but no subs. I called on our U13 girls for 'lung relief'. They soon realised that the only thing the U15 players had over them was that they were taller. They became regular players and a strong contributor to our successful season.

With the limited space I will mention, Caitlin, our player of the year. Who showed the team what heart meant. Diving for rips, kick and chases, support play and line breaks. This girl’s heart was revving in the red at the end of each game. Georgia with her boundless energy stepping everyone yet her greatest contribution to the team was her positive influence and as such, she received the Cote Commitment award.  Sharlize reserved her talents at the start but the more she let them out, the more impact she had and became our most improved player of the year.

Geoff, myself and the club could not be more pleased with the girls’ attitude and development and it was our fortune to have been a part of it 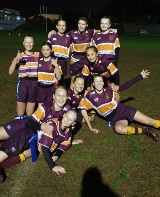 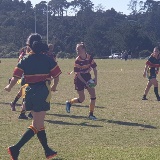 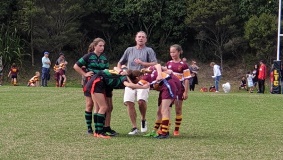