The team started their first-year tackle season with a mix of nerves and excitement. From the first training, the boys showed an eagerness to learn the new skills needed to transition from rippa to tackle and loved charging at the tackle bags. Their first game, played in torrential rain against a tough opposition, provided ample opportunities to put their new skills to the test and reinforced the need to protect the ball and play as a team.

They came off the field muddy, saturated and ready for more. What turned out to be the last game of our shortened season was the team's first game without the coach on the field and this time it was my turn to be nervous. But I didn't need to worry. The boys stepped up and showed leadership, skill and teamwork to take the win.

It has been fantastic seeing them all develop over the shortened season and find a position in the team that suits their natural abilities.

With 3 wins from the 6 games played, the team was starting to hit their stride and it would have been exciting to see how the second half of the season went. I have a feeling they would have done well.

As always, it is a team effort to get the players ready for the season and showing up on the field each week. Thanks to the Club and North Harbour Rugby for the intro to tackle sessions run during preseason, to the parents who helped out at training, to Eric and Chris for volunteering to be team referees and to all the parents for washing jerseys, helping to run the subs and being the teams cheer squad. It has been another enjoyable, albeit short, season. 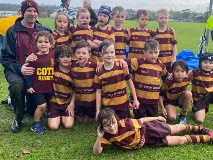 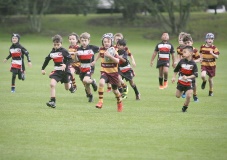