Our season started with 10 players from our 2020 season and we welcomed 3 new members making up our enthusiastic rugby team of 13 players.

Thursdays are our training day. Our practices are broken down into a mixture of skills and drill work followed by splitting into the backs and forwards to develop the players further in these areas. Paul McIndoe helped with coaching our forwards this year.

With only one weekly training for an hour, it is a lot for the boys to take on. We often wondered if they would remember what they were taught at training but come Saturday they would prove to us they did. We always have great parent support on Thursdays and at the end of the training each week it became Dad vs team training/ game which was a great way to finish training.

The contested lineout rule brought a new dimension for the forward pack who with having great jumpers managed to secure our ball at crucial times. With the forwards bridging, clearing and knowing the moment when to pick and go this gave the backs line space to use moves like cuts & loops. This showed how the team has developed to go out onto the field as a team and make their own decisions on when certain plays are to be made.

With a mixed bag of results this year the boys can be very proud of what they have achieved. We had three very close losses, one draw and seven wins. There were some games that challenged and frustrated the team and these games we learnt from. Tries were scored from winning or stealing the ball from opposition lineouts, winning the breakdown whether it is through bridging or clearing the ball and knowing when to pick and go.

Quite often the ball would be handled throughout the team before being placed over the try line. When the boys “clicked” as a team it was great rugby to watch. I think there are a few Grandparents and other supporters that would also agree with this. We are very lucky to have such great sideline support at our games.

Thank you to Phil Brown who offered to be our ref for the season and thank you to all our supporters you have been amazing support on the sideline this year.

We have enjoyed watching the team develop throughout the season and most importantly watching them have fun playing rugby with their teammates.

We look forward to seeing everyone next year – full field. 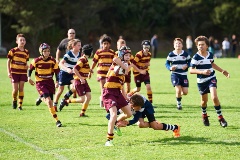