Team write up in June

The season started with a win over Massey 30-3 at Birkenhead. A serious injury in the first half to a Massey player unsettled both teams. The score was 4-3 at half time. However a strong Northcote forward pack dominated in the second half and five tries resulted. John Mills scored a try in both halves and was player of the day. Others to score were Greg McGee, Phil Hannah, Phil Heath and Tony Brown. The score might have been greater had teh team supported teh ball carrier more.

Pakuranga 3rds were subdued after 'coates' were down 10-3 at halftime. A good forward pack performance in the second half yielded three tries to Kani Edwards, Grant Smith and Tony Brown. Phil Hannah was player of the day with a good fullbacks game, tackling and running into the backline well.

Eden were not really in teh class of Gold on this day, 47-0 tells all. Stars of teh day were forwards Piki Thomas and Lee Riley. two players Northcote supporters should hope to see a lot of.

A day the boys would rather forget. Brett Craies was playing for the seniors so the backline was without its usual general. the referee was late and teh opposition were a large well drilled team. It was a close match and the final whistle sounded for a 13-11 defeat for Northcote. This could really be a good lesson for a team aiming at championship honours.

A bounce back victory over Western United shows the character in this side. The ground was slippery which committed 'coates' to a dour forward struggle with a well drilled Western United pack. A try and two penalties in the first half to Northcote gave a handy lead of 12-3 at halftime. This was no indication of teh territorial situation, However in the second half 'coates' managed to dominate through the pace and hard running of its backs. Four more tries resulted and teh team appreciated the return of 'General' Craies.

16-6 over East Tamaki and we are two points closer to the championship. the forwards played too loosely and were intimidated by the opposition. The exception being Tony Brown who was a strength in lineouts and mauls. Brett Craies added the penalties to 'coates' solitary try to make up teh 16 points.

There are some players in this side that will undoubtedly be laying claim to positions in teh senior side before long. Brett Craies has already had a run, Pike Thomas will continue a line pf props from this source. Tony brown at lock has got time on his side but is showing a lot of promise. Phil Heath (a 2nd five of the lager variety) and Phil Hannah a competent fullback will undoubtedly be in the running also.

Any member of this dedicated side, carefully coached by Bill Goldsmith and Dave Newman will have a chance. 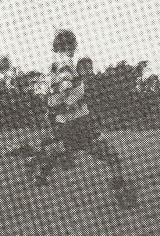 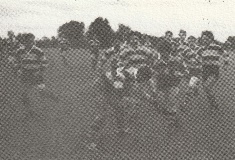 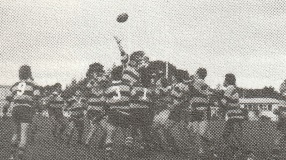 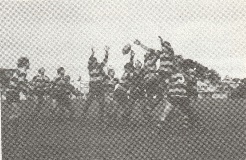