2019 has been a season of change for the mighty Nobras, we had a bit of a bumpy start but once we had got ourselves organised, our performance and numbers began to improve. By the end of the season, we had seen over 80 players don the jersey, with an average age of 45. We finished the season strongly and mainly on the right side of a 4-all draw.

With many memorable games this season, one of our most memorable was at home against Marist Bluebellies, while we didn’t get the result we wanted, we were all reminded what it means to be a Nobra, as several Northcote legends took the field and put their bodies on the line, all in remembrance of George Driver and in respect of the Driver Whanau.

The season was capped off in true Nobras style - a ruthless yet methodical demolition of a combined team from Takapuna and Marist, both of whom had knocked us over earlier in the year.

Congratulations to Ivan Millan for being awarded the Henry Tohu Cup, his performance during the final game and throughout the season made him a worthy winner. Also, we in introduced a new award, the NOBRA Supporter of the Year, and had the pleasure of awarding this to Nanc Inise Manu.

Always there to support us with the little ones in tow, and she has also been a huge help behind the scenes while the new management found their feet.

Looking to the horizon, the future of the Nobras is looking bright. Thanks to Chris Somerville and Alf

Aitcheson for stepping up as our management team, we are now organised and focussed on making the team great again. We would like to thank our supporters and those guys that have put their bodies on the line this year and we hope you will do the same next year. We’re also very grateful to our sponsors, without them we wouldn’t be able to do what we do - RYCO Hydraulics NZ, ADP Hydraulics NZ, Digmax, Takapuna Car Clinic, Highbury Butcher and Handle Solutions. 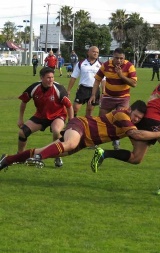