After the season was cut short last year, and robbing the grade of our last couple of games and finals day, the mighty Nobras were back and raring to go in season 2021.

With most of the boys returning and registered to start the season, on paper we had big numbers. But as is often the case, injuries happen (generally on a weekly basis as we become more “senior”), and with family commitments and other adulting to be done, we started the season fairly lean - in numbers, not in body shape. Then the unthinkable… three bone breaks in three consecutive weeks! Some may say it’s only surprising because it hasn’t happened until this year! So with new recruits and calls made to reinforcements, we got out there to remind our supporters how much skill, speed and athleticism we no longer possess.

In saying that, some awesome footy was played, and amazing tries were scored by the Nobras. A few games dropped that probably shouldn’t have been, but given we’re still in something of a (consistent) rebuilding phase, we only dwelled on it for a few minutes after the final whistle, and the sting of defeat was gone before the first beer was finished.

As always, if the season was caught on film, the highlights reel would be like some of our hits - massive… And like the range of some of our tries - long… And the only thing longer would be the bloopers reel… or some of the aftermatch speeches! Far too many contributors to single out anyone, but we’re a team and the Nobras are one!

On a whole, another successful season for the Mighty Nobras, in which we brought home the Peter Dick and Dick Hudson memorial trophies from the Puna Turtles and Marist Bluebellies respectively, and a season capped off by a stunning performance on Finals Day against the Puna Guerillas who requested to play us and backed themselves. In every aspect of the game, the Nobras dominated, everything they threw at us, we had an answer, and any ascendance they gained, we returned with interest to run out comprehensive winners. Nice work boys.

As has been the case for the last couple of years, the Nobras have put an emphasis on the importance of mental health, looking after yourself and each other, and asking for help and offering it. This was well received by the other teams too, and our philosophy to “take care” will remain. 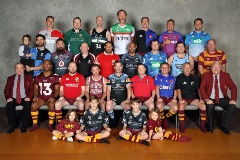