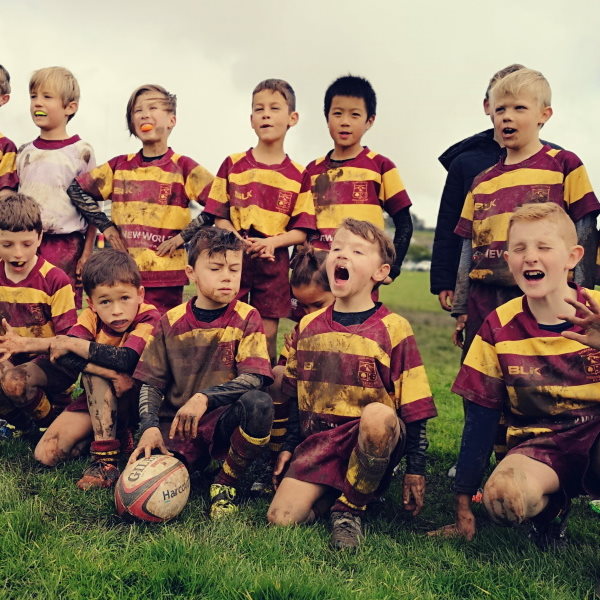 Catching and passing the rugby ball are two fundamental skills. It is also a very complicated skill yet very easy to master.

Passing is a skill that gets better with practice but if a player is practicing a bad technique they will limit what they can achieve. It is much easier to teach the correct technique at the start of a players career than it is to un-teach them their bad habits and so we have put this tutorial together to help you guide them in the right direction sooner rather than later.

This learning is best done every day at home as opposed to once a week at practice. This is something that is best done five days a week for 2-3 weeks. It is only three minutes of involvement but is a great opportunity for parents to be involved in the development of their kid.

It requires two people, a 'coach' and the player. One ball and an indoor (if mum allows it) or outdoor space to pass. The coach does not need to be able to pass themselves but does need to have read this article and be able to point out techniques and tips.

It is really important to have a good quality ball of the correct size. If the ball has no grip, is out of shape, too big then they will struggle to learn to pass. It will also just discourage them as it seems impossible to do the skill and if you have the wrong ball it is probably true. Below is a general size chart. If you have any doubt about what size is best, take the smaller size. Progress may be even faster and I don't believe it will be detrimental.

If you don't have a decent ball talk to your coach or the committee to help lend you one.

What to know first

When learning a new skill we are training our nervous system. We are coordinating trillions of neural cells connected to muscles, tendons and ligaments to fire in the correct sequence to execute the pass. It will take 10 minutes to store the knowledge in our heads but hours of practice to build those neural pathways. And kids are already developing a hundred other skills as they grow. So be patient.

When training the nervous system there are a few keys.

The training is 95% concentrating and 5% effort. If the player is tired, it is really hard to learn and if they are not interested then it's just not going to progress well.

The routine for this is around 2-5 minutes. Once a day, or twice a day if the player wants to. Two minutes of full concentration is all it takes.

But first, learn to catch

Catching a rugby ball is really important because if we can't catch the ball, we can't have a chance to pass the ball or have a run.

Visit our Catching help page first before working on the pass.

Hold the ball in two hands at one end of the ball and do simple short push passes. Don't encourage any 'spinning' of the ball. The more they concentrate and try and spin the worse their pass will be.

Two points to take away:

Don't worry about the quality of the pass or giving any 'technical' advice. As long as they are applying the two points of the drill then this is fantastic.

With a bit of age, they are ready to apply a bit more concentration to the next development of the pass. The skills of step one still apply but at this stage, they should be able to comfortably throw a short pass.

Two points to take away:

When practicing encourage just a 70% effort and keep close enough so they can make the distance. Don't worry about the quality of the pass. The important part is the start and end positions. The more they concentrate on those two things the better the consistency the passes will become.

At this stage, we start to push the finer points of the pass.

At this stage, the player is practicing this for the rest of their rugby careers. One of the biggest steps to improving and staying at a high level is for the player to analyse their own good and the bad passes. When they do a bad pass they should be able to explain what went wrong. When they can do this they have mastered the pass.

One of the keys of this training is that the player wants to learn. It really is a mental training and needs that desire from the player. But how do you get a kid interested?

For my kids, a reward system works. They do the training and they get paid or have credits towards something. For your kids, it may just be playing with mum or dad. You might make a game out of it for bragging rights. Perhaps a challenge to impress a granddad or other relative. Whatever it is, make sure you are not forcing the training or guilt-tripping them to do it. It may take a bit of encouragement at the start to get going but as it goes on they should be wanting to do it.

It just may be that this is not the year or time to do it. Try again later.

My best advice when you get started. Don't highlight the problems but make a big deal of progress. When that one awesome pass happens, make sure the whole family hears about it. Kids love making their parents proud.

You will get to the stage where they have got it. Perfect looking passes when they pay attention to what they are doing. This is the end goal, it's done. They have built those neural pathways permanently into their brains. Even after they stop and come back, they will be rusty but with a bit of practice, concentration and they will pull it all back.

Still, don't be surprised if they never do it on the field. You'll be all excited telling others how awesome your kid is and they'll revert back to throwing pies when on the field. They haven't forgotten it's just that in a game, or at practice, there are other things happening which will interfere with their concentration. They didn't practice with someone trying to tackle them at the same time.

But don't worry, they will. From here it's encouraging them to do that pass just once in the game. Then once will become twice a few games later. Then both left and right hands. Over time and seasons, it will build until it is permanently part of their game.